We’re very excited about this year’s holiday menu because it comes just after our Chef, Zach Wingold, traveled to Mexico in search of culinary inspiration. In today’s post, we’ve asked Chef Wingold to explain a little bit about the traditional methods he got to try out first-hand and how they influenced this year’s special holiday menu. Here’s what Chef had to say:

This year’s holiday menu is inspired by a trip I took to Oaxaca, Mexico this fall. Oaxaca is full of traditions and is famous for its dedication to celebrating Dia de los Muertos (Day of the Dead). However, Oaxacan tradition doesn’t end with Day of the Dead in November. Traditional Oaxacan holiday 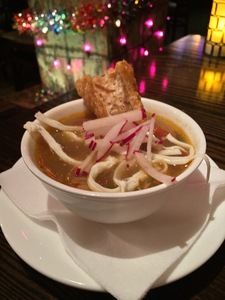 celebrations continue through the month of December and are just as much about traditional Mexican cuisine as they are about quality time with loved ones. I have integrated Oaxacan culinary techniques, flavors, and imported ingredients into the holiday menu to provide our guests with a window into a traditional Oaxacan holiday meal.

A Classic Pozole Rojo is a hominy stew, which is a well-known Oaxacan dish primarily served during the holiday season. A perfect escape from chilly December weather, this Oaxacan soup is rich with flavor, topped with Oaxacan string cheese called “Quesillo,” and accompanied with local pork carnitas. 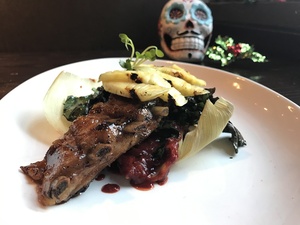 Tamales are also a traditional Mexican holiday food. Mancha Manteles is one of the seven moles (sauces) in Oaxaca and pairs perfectly with grilled pork ribs. The tamale recipe came from a village called Teotitlan less than 30 miles from Oaxaca city. Villagers in Teotitlan have maintained their Zapotecan culture and culinary traditions.This tamale is specifically inspired by the Zapotecan tradition I was able to experience during my trip to Oaxaca and its surrounding areas. Zapotecan tamales are steamed in fresh cornhusks rather than the traditional banana leaf, due to the abundant production of corn in the area. Despite changes in access to imported goods and processed products, the cornhusk remains a traditional method of tamale preparation. This is a direct recipe from a well respected, Zapotecan woman, Pastora, whose wealth of alternative cooking methods expanded my culinary repertoire. 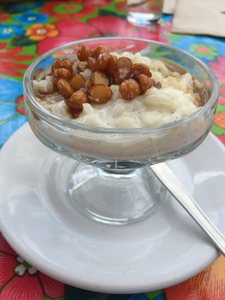 This treat is a traditional Oaxacan rice pudding and is a direct recipe from Chef Pilar Cabrera who is best known for her restaurant La Olla in Oaxaca city. On the rooftop of La Olla, Chef Pilar shared with me the benefits of using unprocessed ingredients such as panela (Mexican sugar cane), canela (raw Mexican cinnamon), star anise, and vanilla bean to develop the base of the rice pudding. I have accompanied the rice pudding with seasonal ingredients including walnuts and pomegranate to reinvent this Mexican tradition.

Check out the video below to watch Chef Wingold make tamales the Zapotecan way while in Oaxaca, Mexico!